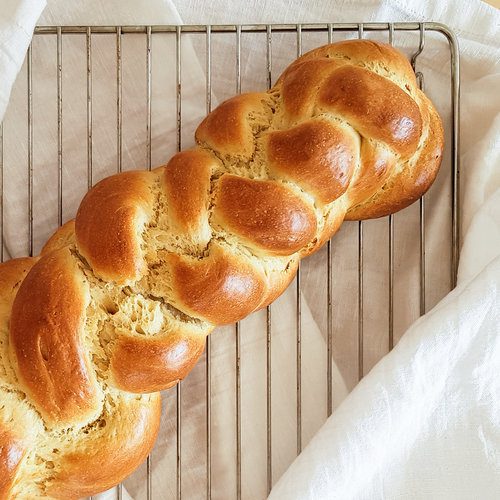 Zopf is a very popular type of bread in Switzerland, which is usually eaten on Sundays. It’s a brioche-style bread that is braided to give it a distinct appearance and interesting texture. Traditionally Zopf is made with full cream, milk and butter. To make it vegan, we used soy cream, soy milk and vegan butter instead which works just as well.

1. In a small saucepan, melt the vegan butter at a gentle heat. Once melted add the soy cream and soy milk to the pan. Continue heating until the liquid’s temperature is about the same as your body temperature (easily tested by dipping a clean finger). Be careful not to heat too much as temperatures above 40°C will begin to kill the yeast and stop the bread from rising.

2. Now we can add the dried instant yeast as well as the sugar and stir together. Leave this to rest for 5 minutes while the yeast ‘wakes up’.

3. In a large bowl, mix the two flours and the salt together then make a well in the middle and add the liquid ingredients from the saucepan and mix with a wooden spoon.

4. Once the dough has come together, lightly flour a clean surface, remove the dough from the bowl and knead it for about 10 minutes until it feels smooth and stops sticking to your hands.

5. Put the dough back into the bowl and cover it with a clean damp tea towel. Let it rest for roughly 1 hour or until it has doubled in size. Alternatively you can rest the dough in the fridge overnight – this will make the Zopf even tastier.

6. After the dough has risen, lightly flour a clean surface and divide the dough in half. Working with one half at a time, gently roll it into a long sausage at least 60cm long.

7. To braid the Zopf: place one half of the dough across the other at a 90 degree angle to make a cross shape. Braid the dough so that it looks something like the picture but don’t worry if you make a mistake – strange Zopf shapes are all part of the fun.

9. After the Zopf has rested, brush the top with some additional soy cream or soy milk. This will give the bread a nice colour as it bakes. Put the Zopf into the oven and bake for 35-40 minutes. The bread is done when it looks golden brown on top and gives a deep and hollow “thump” sound when you knock on the bottom. Remove from the oven and place on a cooling rack.

10. Enjoy serving with either sweet or savoury toppings. Jam and coconut yoghurt works especially well but so does vegan cream cheese and cucumber slices!

*Do not underestimate how important the quality of the flour is. We recommend that you look for organic unbleached flours in the supermarket or ask for the freshest flour available if you’re at a specialty food store. This recipe does not need high protein “bread” flour as this will create a firmer texture instead of the soft and creamy interior that is traditional for Zopf.