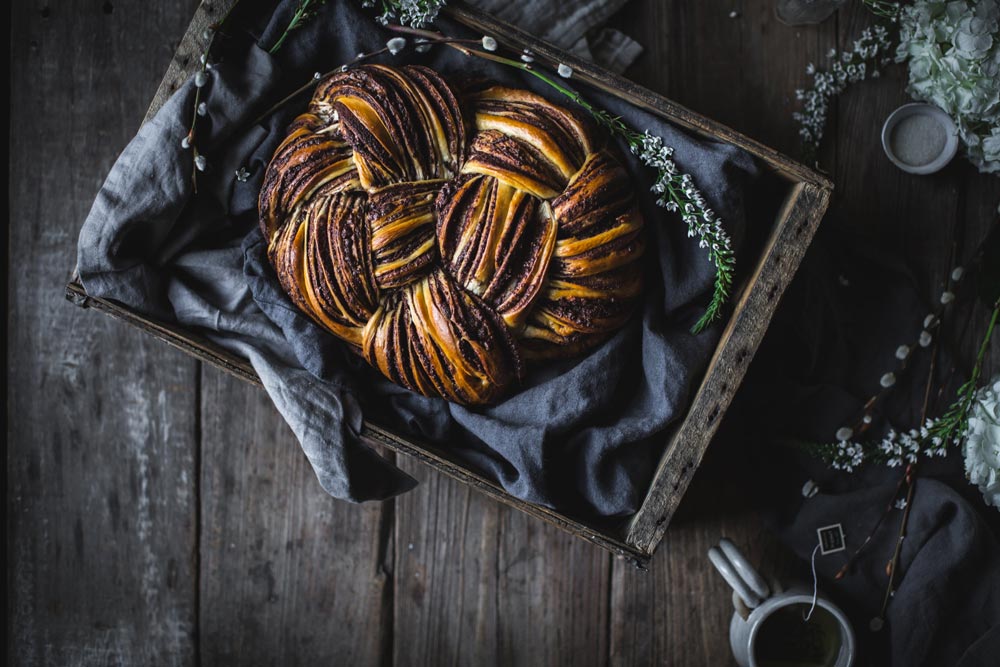 For the dough, mix together the milk and yeast and allow to rest for 5 minutes.

In the bowl of a stand mixer fitted with the dough hook attachment, combine the milk mixture, flour, water, orange juice, orange zest, sugar, vanilla extract, salt, and milk at low speed until the dough just barely comes together.

Add the butter in thirds, mixing well after each addition. Continue mixing until a soft smooth dough forms and the dough pulls away form the sides of the mixing bowl, forming a smooth solid mass of dough around the hook, about 5 minutes. (You can do this by hand, as well, and just knead the dough until smooth and supple.)

Transfer the dough to a greased bowl, cover, and let it rise for 45 minutes at room temperature out of direct sunlight.

While the dough is rising, you can make the filling. Melt the chocolate and butter in the top of a double boiler until smooth, stirring constantly or in a pan on the Simmering Plate. Remove from heat and stir in the sugar, flour, cocoa powder, egg white, cinnamon, and salt. Set aside to cool.

Turn the dough out onto a lightly floured surface and knead for 2 minutes. Divide it into three equal parts. Pat out each part into a rough rectangle shape and place them on a baking sheet lined with parchment paper. Wrap it in plastic wrap and refrigerate it for 90 minutes.

Take one of the rectangles of dough and roll it out into a roughly 24 x 8-inch rectangle. Spread it with 1/3 of the chocolate mixture, then roll it up along the longest edge as you would if you were making cinnamon rolls. Cover the roll in plastic wrap and place it in the refrigerator. Repeat with the remaining two rectangles of dough, and allow the rolled-up dough cylinders to chill in the refrigerator for 30 minutes.

Take one of the cylinders and roll it on a flat clean working surface, lengthening it with your hands until the cylinder reaches about 34 inches in length. Cut it in half legnthwise and set the two long strips aside. Repeat with the other two cylinders.

Cover with a greased piece of plastic wrap and set aside to rise for 1 hour out of direct sunlight.

Lightly brush the bread with the egg wash and bake it in the Baking oven for 25 minutes. Remove it, cover lightly with foil, and bake another 25 minutes. Remove the foil and bake for 5 to 10 minutes more, uncovered, until the exterior of the bread is deeply golden and a thermometer inserted into the bread reads at least 190 degrees Fahrenheit.