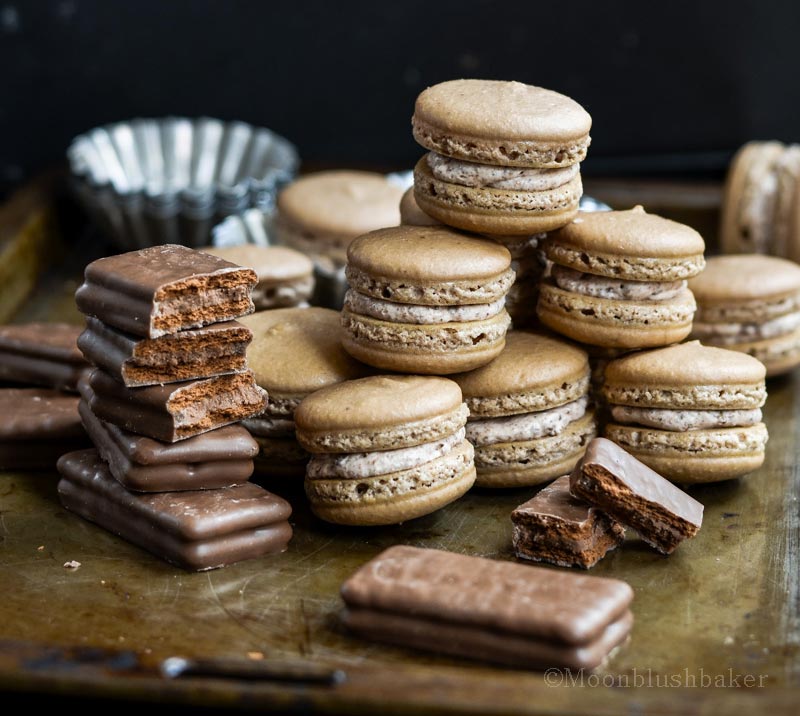 Place icing sugar, cocoa and instant espresso in food processor and turn on high for one minute. Stir in almond meal and pulse for 5 rounds. Sift into a large mixing bowl and set aside. Using an electric mixer, beat egg whites and salt in a mixing bowl until it reaches soft peaks.

Turn the mixer to high speed, gradually add sugar and beat until it reaches stiff peaks. It will be shinny and hold a peak, not dry textured though.

Add all meringue to your dry mixture and mix together with a spatula, By using the spatula to push the meringue against the side of the bowl to break down bubbles, do this for 10 strokes. Then fold carefully til it becomes incorporated and the mixture starts to become shiny again. The mixture should flow like lava and a streak of mixture spread over the surface of the rest of the mixture should disappear after about 30 seconds. Place mixture in a piping bag with a 1 or 1.5cm round piping tip.

Pipe circles about 3cm wide on your prepared trays, leaving about 3cm space around each one. Tap baking sheets carefully but firmly on the benchtop a couple times.

Leave to dry for about 60 mins, until it develops a skin like texture and is not sticky to touch. Bake for 20-25 minutes until risen and dry in the Simmering Oven. You can test one by lifting it carefully off the baking sheet, if it is sticky and tears it is not done but if comes clean it is ready.

In a medium pot, bring the milk to a simmer on the Simmering Plate along with the vanilla bean pods. Take off the heat and set aside to steep for at least one hour. Dissolve malted milk and ovaltine in the sauce pan while still warm.

Strain the milk mixture into another bowl but reserves the vanilla pods. Scrape out the vanilla pods and set the mixture aside. Return the milk to a simmer on the Simmering Plate. Whisk together the sugar, reserved vanilla bean scrapings, corn and eggs medium bowl.

Temper the milk in the egg mixture by pouring a steady thin stream of hot milk into the egg mix while whisking. Return the tempered egg/milk mixture back into the pot. Whisk until the mixture begins to thicken and bubble sluggishly. From that point, continue whisking and cooking for a full minute more; use a timer or you run the risk of not fully cooking out the cornstarch. When the minute is up, pour the custard into a large mixing bowl.

In a stand mixer, beat it with the mixer paddle until room temp. This will take a while like 25 minutes. Beat it till it is creamy and stable.
Cut you butter into a small dice. Proceeded to add in the butter, one tablespoon at a time. Add the salt and continue to whip until the mixture is creamy and homogenous.
Add your crushed Tim tams and mix to combine.
Use immediately or refrigerate until needed. When ready to use, whip until creamy before proceeding.