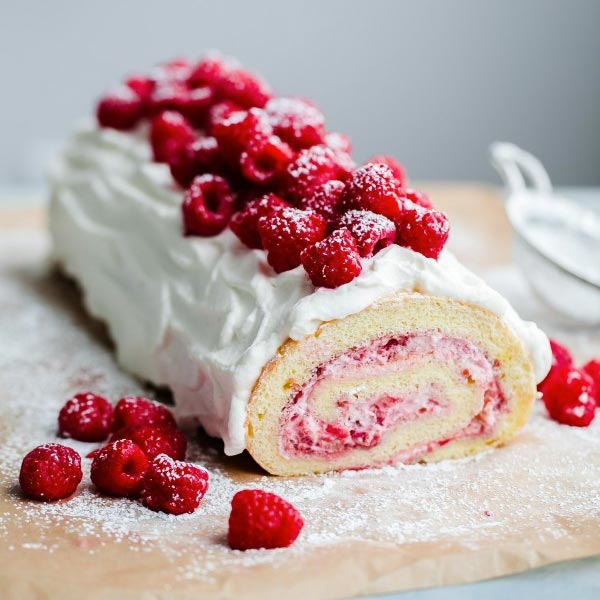 Line a half sheet pan (roughly 18-inch long x 13-inch wide) with parchment paper and lightly coat with baking spray. Set aside. Placed the egg whites in the bowl of a stand mixer and whisk over high speed until light and foamy.

Slowly sprinkle in the granulated sugar and continue whisking over medium-high speed until the egg whites have reached stiff peaks. Carefully transfer to a large mixing bowl until ready to use.

Wipe the stand mixer bowl clean (don’t worry if there is still some residue) and combine the egg yolks, second amount of granulated sugar, and vanilla extract. Using the whisk attachment, beat over high speed until fluffy and pale yellow, about 3 to 4 minutes.

Add about a third of the egg whites to the beaten yolk mixture, and combine together gently using the stand mixer whisk attachment.

Repeat with two more additions of the egg white mixture, folding in very gently with a large spatula. Do not overwork. Sprinkle roughly a quarter of the cake flour onto the sponge batter, and fold in gently.

Repeat until all of the flour has been incorporated. Transfer the batter onto the prepared sheet pan and spread into an even layer using an offset spatula (the batter should fill the entire pan).

Bake for 8 to 12 minutes, or until very lightly golden in color on the grid shelf set on the floor of the Roasting Oven. As soon as the cake is removed from the oven, loosen the edges of the cake from the pan with a knife. Carefully and quickly invert the sheet pan (long edge of the pan facing you) and cake onto the linen.

Carefully peel off the parchment paper. While the cake is still warm, roll the cake and linen, narrow end to narrow end, into a tight spiral.Cool on a rack, in the linen, until the cake is room temperature.

Unroll the cake so that it lays completely flat. Using an offset spatula, spread the raspberry preserves into a very thin layer on the cake.

In the bowl of a stand mixer, fitted with a whisk attachment, combine the heavy cream, powdered sugar, and vanilla extract. Beat until slightly thick and medium peaks form. In a small bowl, lightly mash one package of raspberries. Gently fold the mashed raspberries into the cream. Spread the raspberry cream into an even, thin layer on the cake, leaving
a 3/4-inch border on all sides.

Slice the second package of raspberries in half and press them gently into the raspberry cream layer. Carefully re-roll the cake (without the linen), narrow end to narrow end, into a spiral. Place the cake seam-side down on a long serving platter, cover tightly with plastic wrap, and refrigerate for at least one to two hours.

Combine the heavy cream, powdered sugar, and vanilla extract. Beat until slightly thick. Using an offset spatula, spread the cream into an even layer onto the outside of the cake. Top the cake with the remaining package of raspberries. Cover lightly with plastic wrap and refrigerate until ready to serve.

Just before serving, dust the cake and berries with confectioner’s sugar and serve immediately.

Recipe from A Beautiful Plate http://www.abeautifulplate.com/raspberry-roll-cake/