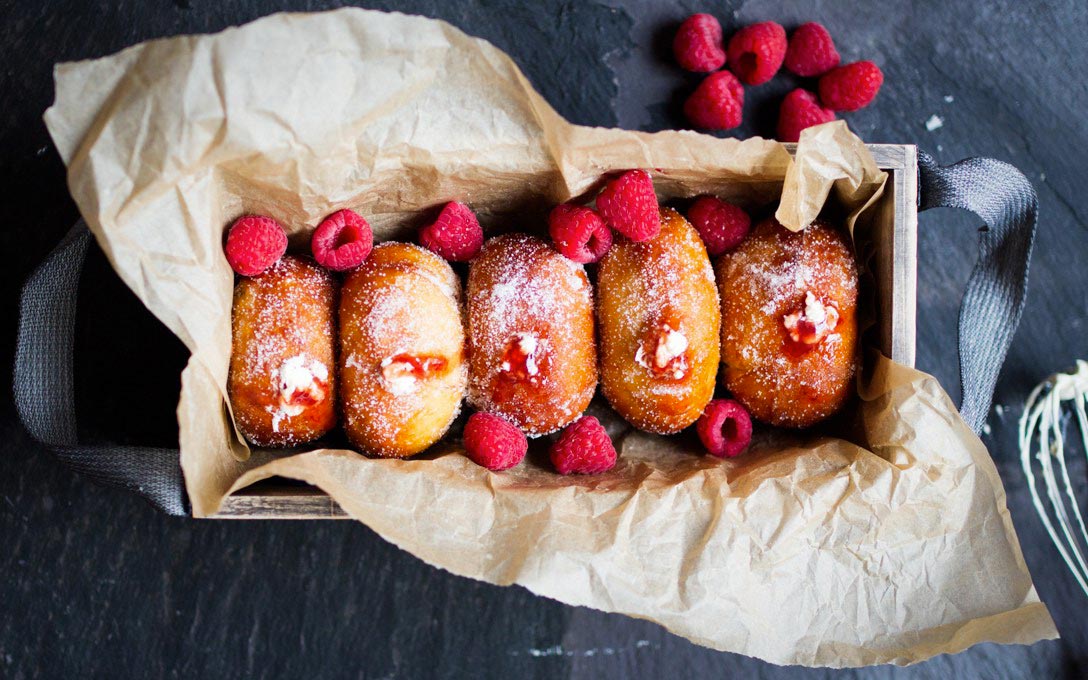 Heat the milk until just about to boil on the Boiling Plate, then take off the heat and leave to cool to a luke-warm temperature.

Place the yeast in a small bowl with the warm water. Mix and leave for 3-4 minutes until frothy.

Place your milk, yeast, sugar, egg, egg yolk, butter, salt and half the flour into the bowl of a stand-mixer. Mix together for a minute (using the dough hook) until combined. Add in the rest of the flour and mix on a medium speed for 4-5 minutes. The dough should smooth and a little sticky.

Place the dough into a lightly oiled bowl and cover with clingfilm. Leave to prove at room temperature until doubled in size (about 60-90 minutes).

Tip the dough out onto a lightly floured surface and knead a few times to punch out the air bubbles. Then split the dough into 12 equal sized portions. Roll each onto into a ball, then flatten each ball very slightly.

Place each ball on a little piece of baking parchment (having them on individual pieces makes it easier to pick up and lower each doughnut into the oil later) and cover with some lightly oiled clingfilm. Leave to prove for a further 30-40 minutes.

Place your caster sugar (for dusting) in a bowl and put to one side.

Meanwhile, pour your oil into a large pan and heat to 160c/320f on the Simmering Plate. Use a thermometer and try to keep your oil temperate as constant as possible.

Cook doughnuts three at a time – gently lowering each one into the pan holding the edge of the baking parchment in one hand and using a spoon or palette knife in the other. Cook for approx. 3 minutes – until dark golden brown – then flip over using a pair of wooden chopsticks. Cook for a further 3 minutes.

Scoop out of the pan using tongs and place straight in the bowl of sugar. Toss in the sugar and place on a cooling rack. Repeat with the remaining doughnuts.

Leave the doughnuts to cool for half an hour.

Meanwhile, give the jam a quick whisk with a fork to loosen (you could add a few drops of water too) and spoon the jam/puree into an icing bag with a large nozzle.

Whisk the cream and confectioner’s sugar together until you reach the soft peaks stage, then spoon it into another icing bag (or plastic sandwich bag with the corner cut out) with a large nozzle.

Use your skewer to push the cream over a little, then squirt in the jam/puree.

Repeat with the remaining doughnuts and serve.

Recipe and images by https://www.kitchensanctuary.com/raspberry-ripple-doughnuts/