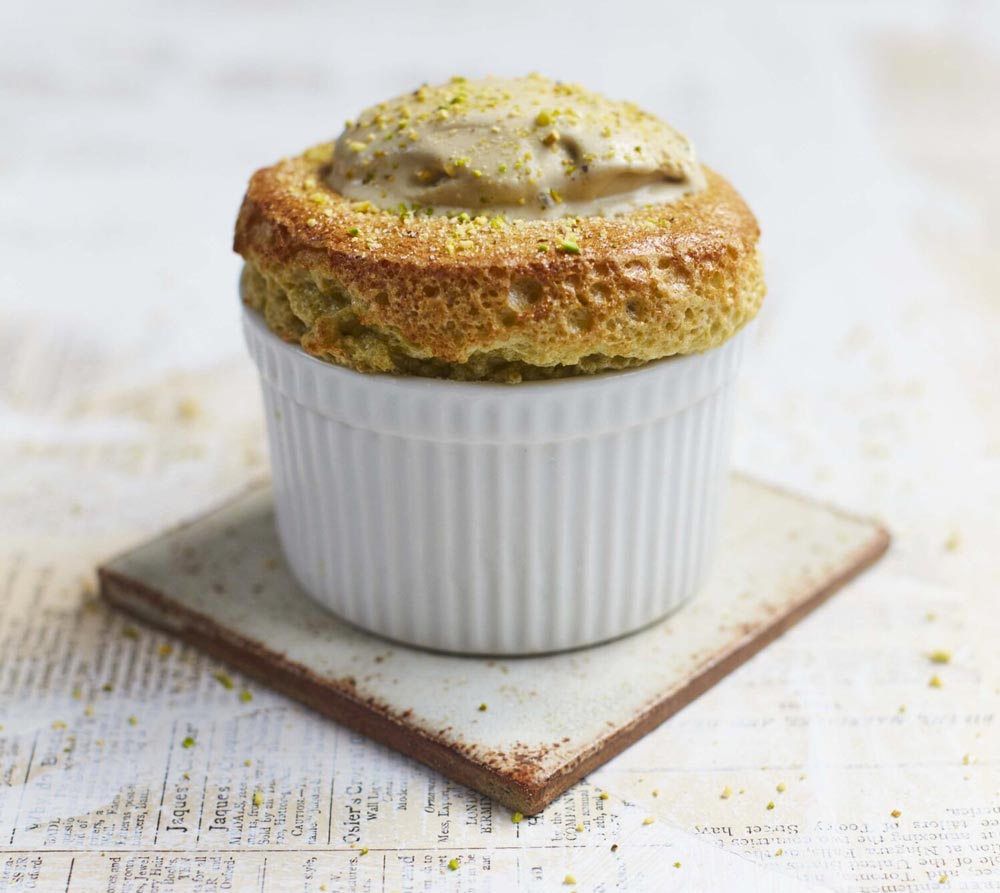 If you would like to make your own pistachio paste take 200g of shelled, unroasted and unsalted pistachios, blanch them in a saucepan of boiling water for 1 minute then plunge them into a bowl of iced water. Carefully “pod” the pistachios from their skin and put them in a food processor. Blitz to a paste and place in a sterilised jar until needed.

Place the egg yolks in a small mixing bowl with the sugar. Place the egg whites in a large, perfectly clean mixing bowl. Put the cornflour, plain flour, matcha and double cream in a medium sized mixing bowl and whisk to a smooth paste.

Pour the milk and pistachio paste into a medium sized AGA cast aluminium non-stick saucepan on the simmering plate. Stir gently and bring to a low simmer. Remove the pan from the heat and whisk the hot milk into the bowl of cornflour mix. Whisk to the consistency of smooth double cream. Then pour the mixture back into the saucepan and whisk again over a low heat, make sure you whisk evenly and constantly so the mixture doesn’t catch.

When the mixture has thickened remove it from the heat. Whisk the egg yolks and sugar together in a large mixing to make light, thick paste. Slowly pour the mixture from the saucepan over the egg yolk and sugar paste whisking all the time.

Quickly wash out the pan and return to the simmering plate. Pour the mix back into the pan and stir continuously on the low heat until you have light custard. Remove the pan from the heat and place to one side to cool before you add the egg whites.

TIP: Transferring to a large mixing bowl over a bowl of iced water will help cool it down quickly, just make sure to keep stirring the mix so it doesn’t set. The mixture needs to be cool before you can add the egg whites.

Take the ramekins from the fridge. Carefully distribute the mixture between the ramekins, filling to the top. Level off the top with the dinner knife and run a thumb around the inside edge of ramekins to make sure they rise evenly. Place the ramekins onto an AGA hard anodised baking tray

Slide the tray of soufflés into the centre of the baking oven and bake for 14-15 minutes until golden and risen.

Serve immediately with a spoonful of pistachio, or hazelnut ice cream, on top and a sprinkle of the chopped pistachio mix.

Conventional cooking: Preheat the oven to 160 C (fan)/ 320 F/ gas mark 3. Place a baking tray in the oven to heat up. Make the custard mixture on the hob.

Place the tray of soufflés on to the preheated tray in the oven and bake for 14-15 minutes until golden and risen. Do not open the oven until they’re ready. Serve as above.