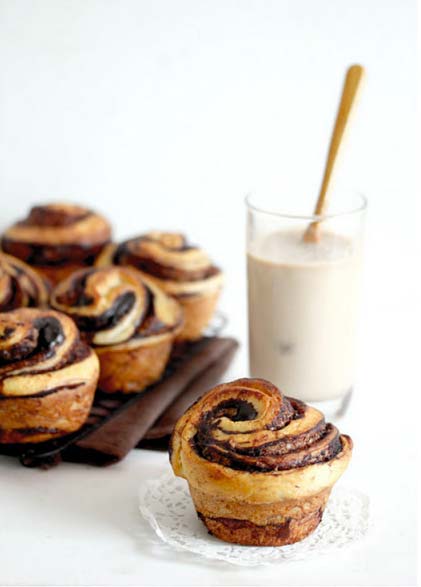 In a large bowl, combine all the ingredients except for the butter and mix until it forms a rough dough.
On an unfloured surface, start kneading the dough incorporating the butter as you do so until it forms a smooth ball; around 8 minutes. Dough may seem extremely buttery initially while you are kneading the butter in but don’t fret, as you continue to knead, the buttery dough will become become a soft pillowy dough. Place the dough back into the bowl – cover with a cloth – and leave in a warm place (on the AGA warming plate or simmering plate lid) for 2 hours or until double in size.

Bring the milk to the boil in a saucepan on the Boiling Plate. While it’s heating, mix the egg white and sugar in a bowl until combined. Mix in the flour and cocoa powder, and beat until homogeneous.
When the milk is boiling, pour it over the cocoa mixture, whisking as you do so. Transfer back into the pan, and cook on the simmering plate until thick. Mix in the butter.
Spread it on a baking tray lined with cling film, around 20×15cm. Freeze till firm.
Remove any air from the brioche dough by gently patting it down, then roll it into a 30×20cm rectangle. Place the cocoa filling in the middle, then fold the dough over it, sealing the extremities together. Roll into a longer rectangle, then make a tour double. Repeat the folding one more time, then roll the dough back into a 30×20cm. Roll the dough onto itself to form a log. Trim the ends, then using a sharp knife, slice into 3cm-thick segments. Butter 12 5.5cm-wide rings, and place the slices into them, cut side up. Cover loosely with cling film, and allow to rise for 30 to 45 minutes. Bake in the Baking Oven for 15 to 20 minutes.

Recipe and images from http://vintagetrinkets.blogspot.com/2011/02/chocolate-brioches.html