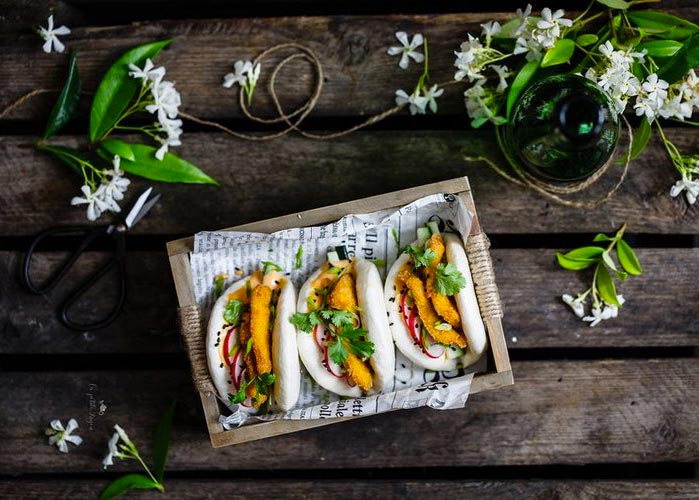 FOR THE BAO BUNS

FOR THE SOUR CUTTERS

Crush the clove of garlic in a mortar with a teaspoon of oil until it is creamy.
Cut the chicken into strips, season with salt, a pinch of pepper and garlic cream.

Dissolve the saffron in half a cup of lukewarm water and let it rest for 10 minutes. After that, mix it with yogurt.

Pour the saffron yogurt over the chicken, mix well, cover with the film and let it rest in the refrigerator for 3 hours or better all night.

FOR THE SOUR CUTTERS

Slice the strips thinly and put them in a large jar.

Pour lukewarm water, vinegar, sugar and salt into a bowl. Mix the ingredients until sugar is dissolved. Then, pour the mixture over the raglan to cover it completely.
Close the jar and let it rest in the refrigerator for 2 hours.

FOR THE BAO BUNS

Sift the flour with the baking powder.
Melt the dried beer yeast in a glass with just warm water and let it rest for about 10 minutes until bubbles appear on the surface.

Pour the sifted flour into the bowl of the standing mixer. Add the sugar, salt, milk and yeast dissolved in the water.
Run the mixer at minimum speed and start kneading with the leaf hook. As soon as all the ingredients are mixed, change the hook and put that hook.
Continue kneading by increasing the speed of a notch. Add a spoonful of oil to the spoon and let the dough be weighed. That is, work it until it is fully rolled to the hook by getting out of the bowl walls.

After finishing, you will get a soft and slightly sticky dough. Pour it over a slightly floured planter, form a ball, place it in a bowl of greased oil, cover with the film and let it rise until it is tripled with volume. .

After it has risen (it will take about 1.30-2 hours), resume the dough and gently deflate it with your palms. Divide the dough into 12-14 pieces and form balls. Then, cover with the film and let it rest for 10 minutes.
In the meantime, cut out 12 to 14 squares of oven paper of about 8-10 cm.
Spread the dough balls trying to form ovals, then fold the dough in half by inserting a square of paper in the middle.
Coat the baskets of the vaporizer with the oven paper, lay over the bao buns by spacing them well between them. Cover the baskets with the film and let the dough rise until doubling.

Fill the bottom of the vaporizer with water, pour 3-4 tablespoons vinegar and bring to a boil on the Boiling Plate. Then, move to the Simmering Plate and stack the baskets with the bao buns and cook for 8-10 minutes.
Pay great attention to the heat of the steam that does not have to be too high, otherwise the dough may swell too much and then deflate once the cooking is completed. From time to time, therefore, raise the lid to test the temperature.
Once the bao buns are cooked, let them warm up before they are stuffed.

FOR COOKING THE CHICKEN

Take the chicken out of the marinade (without removing it all though). Then, put it in the bread crumbs, and heat the oil on the Boiling Plate and fry it in plenty of hot oil until it is golden.

Mix 4 tablespoons of mayonnaise with 2 tablespoons of sriracha sauce (or more depending on the spiciness you want).
Cut cucumbers and spring onions into slices.

Gently open the bao buns, sprinkle them with a spoon of spicy mayonnaise and stuff them with the slices of cucumbers, the sweet cuts, the spring onions, the coriander leaves and the fried chicken. Spilled with roasted sesame seeds and served.