An adventure down to country Victoria to find the first AGA 60 cooker sold in Australia and meet its owner, Trevor Hodson.

The South West of Melbourne seems to be the home of many AGA cookers, big and small. About 2 hours out of Melbourne, on the way to the Great Ocean Road, lives Eye Surgeon for over 32 years Trevor Hodson and his wife, Ros. Originally from Tatura (near Shepparton), Trevor relocated to Melbourne after high school to study medicine at the University of Melbourne and later ophthalmology at the Eye and Ear Hospital. He practiced in Essendon for 10 years before accepting an invitation to work in Mount Gambier.

After deciding they needed a change, they made the incredible move to the small rural town of Birregurra. “One of the most exciting things about our move to Birregurra was building our first house from scratch. It was so fascinating to see the progress from start to finish, and see our vision come to life.” The home was once a vacant block in the heart of Birregurra which they bought and built on with the assistance of renowned Fitzroy-based Architect Judith North. “The conception was an interesting process because Judith came and looked at our house in Mount Gambier and asked us what things we wanted to keep, and we discussed how we wanted the house to work. Judith’s firm is very environmentally conscious and that really fits in with how we are. We wanted a home where, in 20 years’ time, we’ll still be able to live in. Everything is on the same level; there are no stairs. We have solar power and high ceilings. Mount Gambier stone and wood feature and this is a little nod to our old home.” Trevor and Ros wanted a home that would be comfortable, and a space that they could entertain in, but also be private. Their home is spacious but so well decorated. The interior is a mixture of eclectic pieces, but also everything has its place. It’s contemporary, with touches of art deco and British themes. It’s an open plan living, with the kitchen, dining room, and living room all connected – it is a truly stunning home.

“It’s the heart of the home; it’s such an icon and beautifully designed cooker.”

The tour of the home is quick as Trevor is extremely excited show me the kitchen and visit his prized possession, his AGA. Bought in 2015, Trevor was the first person in Australia to order the AGA 60 cooker and is also one of few to own the British Racing Green colour. “I’m a really big fan of English things. And the AGA is a really big thing in England. It’s the heart of the home; it’s such an icon and beautifully designed cooker.” We sit at his dining table and he serves me some beautiful warm scones straight out of his AGA 60, scones that have made him famous among friends and family due to their delightfulness, with some fresh cream and jam, and a green tea. I ask him how he came to find out about AGA cookers.

After seeing the AGA 60 cooker advertised in an English Country Life magazine he was reading, Trevor was quick to order it from the AGA Australia Prahran Showroom. It was everything he had always wanted, just in a smaller size that would fit into his kitchen perfectly. “The AGA 60 had everything I needed. It had the Boiling and Simmering hotplates, and it had the Roasting, Baking and Simmering ovens; it was exactly what I’ve always wanted but just a smaller version, so I decided to get one. And I had to get the British Racing Green colour to match my love of British things and fit in with the colour palette of our home.”

“The AGA 60 just fitted in perfectly and now it’s a home. When we saw it in place in our kitchen we both fell in love. We loved it and were so happy.”

The Hodson’s AGA 60 cooker stayed in storage for 18 months until the home was completed and it was time to install. Trevor and Ros hadn’t even seen their cooker in person until it was installed, only photos on the internet and similar cookers in the showroom. However, they were very delighted once they finally saw it in their kitchen.

“The AGA 60 just fitted in perfectly and now it’s a home. When we saw it in place in our kitchen we both fell in love. We loved it and were so happy.”

One of Trevor’s major passions is cooking. His first meal cooked in the AGA 60? “Chicken thighs baked with lemon, potatoes and green beans – I was so happy I felt like I conquered the AGA.” He cannot stop talking about his favourite meal to cook in his AGA, Roast Pumpkin. “The roasting is just amazing. I’ve never had better roast pumpkin than in the AGA, I could have roast pumpkin every day its that good. It just caramelizes so nicely in the oven.” He praises his wife Ros’ desserts and hails her as the ‘meringue queen’. “We’ve had to do a bit of trial and error with the meringues but now we’ve worked out how to make them perfectly.” Trevor claims the best time to make meringues in the AGA 60 is when the Roasting/Baking oven has been on for a while and is now turned off and cooling down. “We put the meringues in the Simmering Oven but don’t turn it on, and they cook perfectly due to the remaining heat in the top oven. The heat stays in the ovens for hours even when turned off therefore it’s the perfect temperature for meringues. You just learn little things like that as you go. It’s been a lot of fun learning and trying new things.” 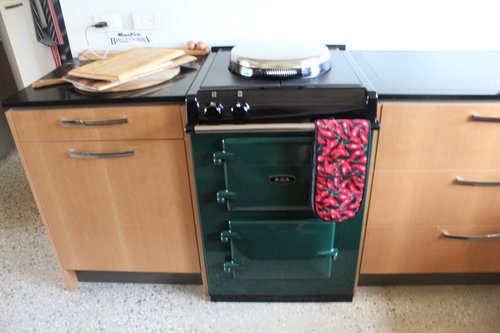 “The AGA changes the way you cook, you don’t cook in a hurry. You cook because you want to and because you love doing it.”

Favourite thing about your AGA? Trevor answers straight away without even any hesitation: “the colour definitely.” Least favourite thing? “I don’t have an unfavourite thing about my AGA. I’m just so glad I have my AGA. At one stage when we were building the house I didn’t think I would be able to have one because of the size constraints. So, I am eternally grateful for the small AGA 60 and that it was a possibility and I have one now. There’s always been a voice in the back of my head saying, ‘you need an AGA, you need an AGA, you know you really need an AGA’. It’s an investment. The AGA changes the way you cook, you don’t cook in a hurry. You cook because you want to and because you love doing it. The AGA even gets a name and it gets a personality, it has its own mind, it becomes your friend and you have to treat it accordingly.”

After spending the afternoon with Trevor, the thing I have learnt the most is how passionate he is about cooking and food, especially roast pumpkin. We could spend the whole afternoon talking about roast pumpkin. “My AGA 60 has taught me that roast pumpkin is a wonderful dish. I just can’t get over how pumpkin tastes in the AGA roasting oven. My go-to recipe is just pumpkin cut into cubes with the skin on, placed in the roasting tray with a bit of olive oil and salt with chicken or a leg of lamb. It just is amazing. Potatoes are great too, but pumpkin is just out of this world. You don’t need much to make food taste amazing, just basic flavours. The AGA has taught me to appreciate simple vegetables. And I’m starting to unlock more and more slow cooking. You can just put meat or vegetables in the Simmering Oven at 2pm for example and have it perfectly ready for dinner at 7pm. These are things I’ve just learnt to do over time spent with my AGA 60 instead of having a really quick, thoughtless meal.”

“Putting your ingredients into the AGA, watching them cook and then eating them is a wonderful feeling.”

It is apparent that the AGA 60 has intensified Trevor’s love and passion for cooking. He enjoys seeing what other people cook, which then inspires him to try to cook new things and experiment. “If I had a choice of watching sport or a cooking show, I would definitely choose the cooking show. My mother gave me my first cooking book when I was 14 years old. I’ll pick things up that I see on TV or in cook books and think next time I’m in the supermarket I’m going to buy those ingredients and try it out. Putting your ingredients into the AGA, watching them cook and then eating them is a wonderful feeling. As we learn and do more with the AGA, it just makes us want to bake more. The AGA has a beautiful even heat which I think is so great about it. The hotplate is great for starting things off like searing/browning etc then into the slow oven it goes and and you can forget about it for a little while.”

“My AGA 60 satisfies me completely – I wouldn’t change it for anything. It’s something I wanted, something I’ve got, and something I’m very pleased with. I’ll be buried in my AGA I think. It’s never leaving me.”